“The Thief and the Cobbler” a Moment in Time 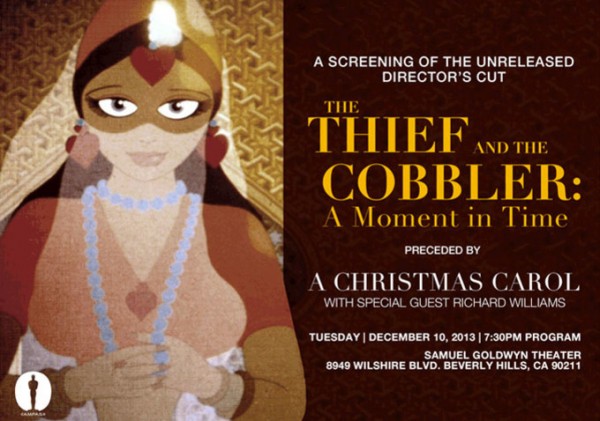 “The Thief and the Cobbler” a Moment in Time is an absolute animation masterpiece.

I went to see the screening of this icon of traditional animation last night and witnessed Richard Williams introduction to the movie as ” how it was on its last work tape run in 1992 ” before he had to relinquish it and it was butchered and defaced by some ignorant production company into the sad versions that still linger on the market as ” The Princess and the Cobbler”( 1993) or ” Arabian Knight”( 1995).

I was lucky enough to have seen a copy of a copy on VHS a million years ago while working in London and I always remembered those incredible scenes when the thief and the cobbler chase each other and the backgrounds get really trippy.

Richard Williams started work on this feature in 1968 and it took the artists, who where some visionaries and on top of their game, 20 years to get to where it was in 1992. In those days they had to work on commercials and other things just to get the money to make their own movie, there was no big studio behind it. That is probably why the story is so fantastic and all the little hints and innuendos which make the movie are still there. Unfortunately at  the very end there was some outside funding and Williams had to give up the entire thing.

Lucky for us the pirate copies and even the badly butchered versions still circulated enough in the animation world for people to see and be amazed by it.

Don’t forget, absolutely everything was hand drawn, in those days there was no computer to do the camera moves or the mechanic monster death machine. No digital help to make the backgrounds do all those unbelievable turns and twists. No after effects  to fix and smooth and change or re composite or whatever else… This was pure traditional animation as it was born and bred. This is what bewitched, inspired and motivated artists to want to work in animation.

I think we really needed to be reminded what animation really is, what it can do and how it made people feel. The modern movies are fun and cool and sweet, but this was something else. This was groundbreaking and mesmerizing and it makes you want to go home and draw, write and work on your own, whatever it is that you do.

I so wish that they will release this work copy version on DVD. This is one of the most important animation milestones, like Gerty the Dinosaur, SnowWhite and the Seven Dwarfs and Fantasia. It belongs on the shelf of every self respecting animator and animation aficionado out there. Lets hope they will… 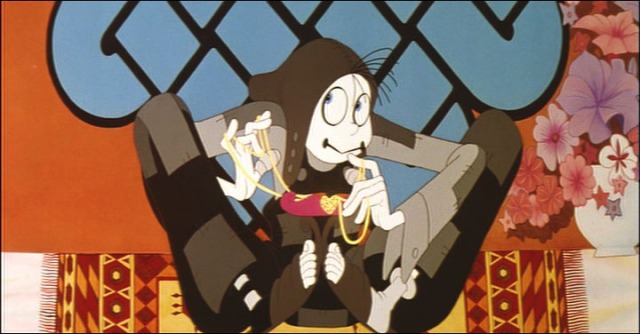 This entry was posted in Animation and tagged Animation, Art, Fantasia, Gerti the Dinosour, London, Richard Williams, SnowWhite, the Academy, The Thief And The Cobbler, The Thief and the Cobbler a Moment in Time, Traditional animation. Bookmark the permalink.